The 40 leading oil and gas producing countries face losing 46% of their oil and gas revenues - a shortfall of $9 trillion - according to a new report from Carbon Tracker.

Beyond Petrostates: The burning need to cut oil dependence in the energy transition calls on petrostates to act now to reduce their dependence on oil and gas revenues, by cutting public spending, raising new taxes, and restructuring their economies.

It reads as a wake-up call to petrostates and international policymakers who have based their planning on industry and OPEC forecasts that demand for oil will increase through to 2040, and a long-term price of $60 a barrel or higher.

Over 400 million people live in the 19 worst affected countries where declining fossil fuel revenues could see total government income fall by at least 20%, leading to cuts in public services and job losses.

Half live in Nigeria, where a 70% drop in oil revenues would cut total government income by a third. Angola, home to 33 million, could lose over 40% of government income. Worldwide, all oil producing countries risk collectively losing $13 trillion by 2040 compared with industry expectations, a 51% drop. 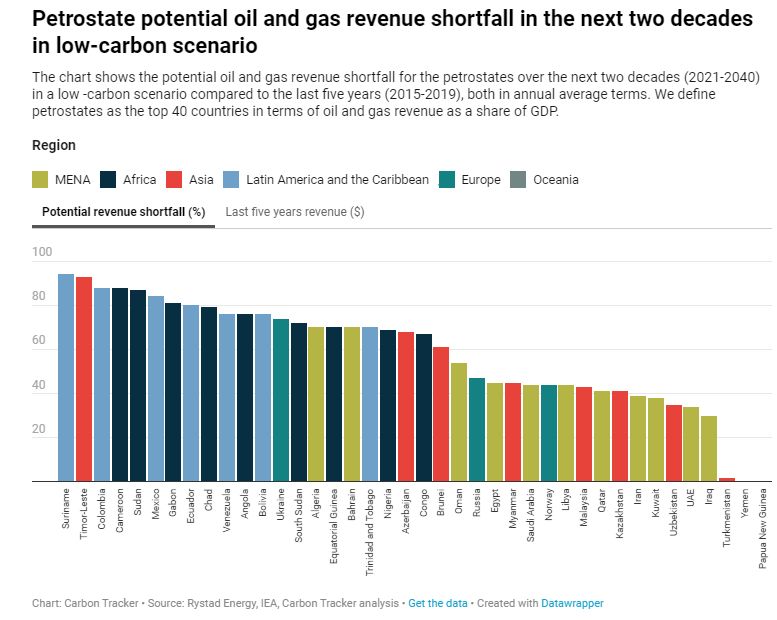 Report author Mike Coffin, senior analyst oil, gas & mining said: "It’s in the interests of all nations to minimise global temperature rises and this means rapidly reducing our use of fossil fuels. But many countries are heavily reliant on oil revenues – the time to act on rebalancing their economies is now. Waiting for demand to fall will be leaving it far too late."

Andrew Grant, head of climate, energy & industry and co-author said government oil revenues will shift dramatically as the market shakes out during the energy transition. "Understanding the scale of the challenge and which nations are most vulnerable will help policymakers focus their efforts. Cushioning the landing for hundreds of millions will deliver better outcomes for both climate and human development," he said.

It warns that continuing to invest in new oil and gas projects risks creating stranded assets and wasting capital that would be better spent on developing sustainable new industries.

Petrostates will minimise losses if there is an orderly wind down of production, with global supply falling in line with decreasing demand and falling oil prices. If they go it alone and seek to monetise their existing reserves while they can, oversupply is likely to destroy value for all, with falling prices quickly outweighing the benefit of increased production.

Many petrostates are already adopting measures to try to bridge the expected hole in their finances. Several Middle Eastern countries have introduced value-added taxes and, with countries like Nigeria, Angola and Iran, taken steps to reduce subsidies. Wealthy gulf states are investing in industries like renewable energy and tourism.

Many countries facing the biggest shortfalls are also among the poorest, have young and rapidly growing populations with least capacity to adapt their economies.

The international community can help the most vulnerable countries, for example by supporting the development of new technologies, offering technical assistance for regulatory and tax reform, and providing capital.