Royal Dutch Shell insists it came out of 2020 with a stronger balance sheet and operational resilience but the impact of tumbling oil prices and the global pandemic led to a $4.8 billion annual loss, a fall of 71% and its lowest in 16 years.

Cash capex reduced to $18 billion in 2020, down $6 billion year-on-year, while underlying opex was down $4 billion to $33 billion. Under IFRS earnings, net loss was almost $21.7 billion and net debt dropped $4 billion to $75 billion - the long-term net debt goal is to reduce this figure to $65 billion.

CEO Ben van Beurden said it is committed to a progressive dividend policy and expects to grow US dollar dividend per share by around 4% from Q1 this year. For the three months to December, the oil major's net income dropped to $393 million while net debt increased by $1.9 billion to $75.4 billion, impacted by reduced cashflow.

The outlook for key sectors in Q1 is as follows:

Corporate
Adjusted Earnings: net expense of $2,400 - $2,800 million for the full year 2021. This excludes the impact of currency exchange rate effects

During Q4, QGC Common Facilities Company, a wholly-owned subsidiary of Shell, agreed to the sale of a 26.25% interest in the Queensland Curtis LNG Common Facilities to Global Infrastructure Partners Australia for US$2.5 billion. The transaction is subject to regulatory approval in Australia and customary conditions and is expected to complete in the first half of 2021.

In January, Shell completed the sale of its 30% interest in Oil Mining Lease 17 in the Eastern Niger Delta, and associated infrastructure, to TNOG Oil and Gas Limited, a related company of Heirs Holdings Limited and Transnational Corporation of Nigeria Plc, for a consideration of $533 million. A total of $453 million was paid by completion with the balance to be paid over an agreed period.

The company recently bought Ubitricity for an undisclosed fee, signalling its acceleration into the EV market as it strives to be net zero by 2050 (click here). 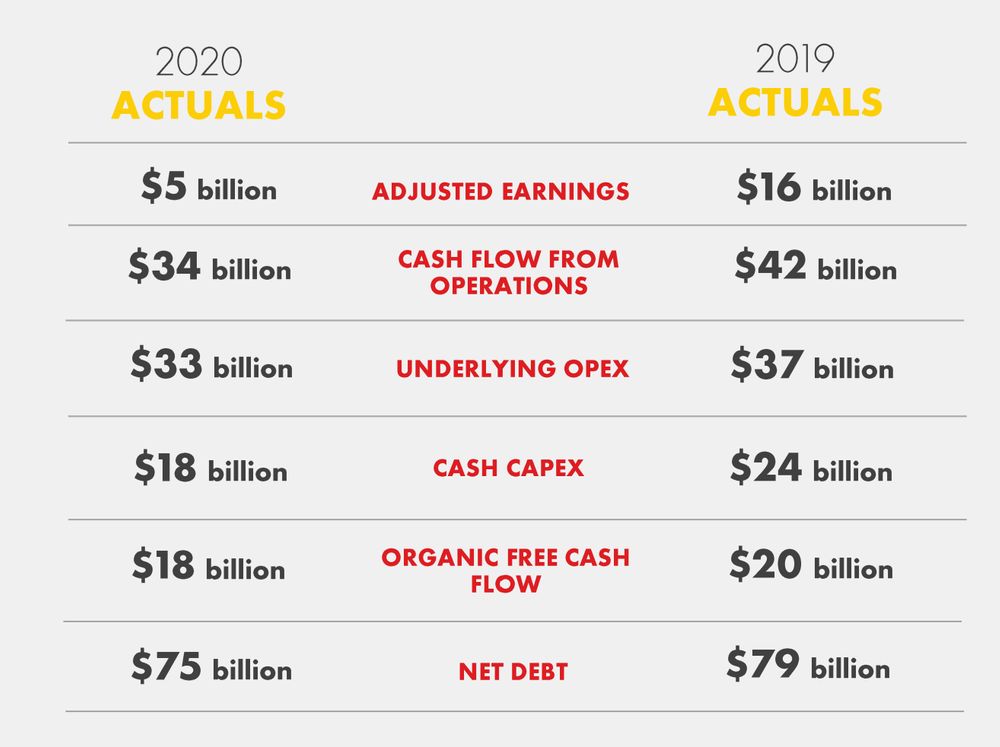 Addressing the key $65 billion debt target "milestone", Uhl highlighted the $34 billion in cashflow from operations last year in a weak trading environment of $42bpd; the company's active divestment programme; and the two recent deals which will generate $3 billion. "We hope that cash will come in over the first half of 2021," she said, adding that its Capex will be in the $19-22 billion range.

Production was impacted by OPEC+ and COVID, which impacted operations and pricing. "All three of those factors were in play in 2020," she said. "In an extraordinarily challenging year, across the board, we improved our balance sheet - net debt was down $4 billion which speaks to the resilience of the company and quality of the operations. Shell is in very good shape and set up to manage uncertainty and hopefully, help fuel the recovery in 2021."

Upstream accounts for around a third of its cashflow last year, which will not only fund shareholder distributions but the energy transition in future, she added. Shell will give more details about its low-carbon plans in its Strategy Day on February 11.

"CCS is not only essential for decarbonising our own assets, but increasingly it will be a business model, almost like turning energy provision into a service," said Van Beurden.

Chemicals, while undergoing a "very steady decline" in margins over 2019/20, has significantly turned a corner. "That's good news because quite often chemical demand is often a tell-tale sign for how the economy is behaving," he added.

While Netherlands, Germany and UK have seen suppressed demand, China is recording growth year-on-year. "I imagine in the course of 2021, some of that demand will come back, and a signficant part of that will be down to aviation," he said.

In response to Shell's inclusion on S&P Global Ratings's recent CreditWatch list (click here), Van Beurden said: "We don't run the company on credit ratings, but with an intent to have a certain balance sheet strength, and we have a number of metrics."